We arrived in Hanoi after a week on a boat in Thailand- so we were tired, a bit stinky, and looking forward to a bed that didn’t sway. I’d booked an Airbnb apartment as I was keen to save cash and do some laundry.

Hanoi was dark and smoky when we landed. Our Uber from the airport dropped us at the end of a narrow alleyway, where groups of young men stood around looking shifty. We apprehensively trundled deeper into the dark alley, our wheelie luggage screaming ‘clueless tourist’, and my heart sank as we identified our dingy and foreboding apartment block, clad with sturdy iron grills.

A toothless, tiny old man was expecting us, and gave us a warm welcome despite not speaking a word of English. He showed us to the apartment which, despite looking exactly like the website photos, looked nothing like the website photos. I was too tired to be bothered about the cockroach in the sink, and too nervous to go back out into the dark in search of food, so we went to bed with half a thought to booking ourselves into a downtown hotel the next morning.

The next morning, as it turned out, everything looked much brighter- it’s amazing what a good night’s sleep and daylight can do. And despite first impressions, Hanoi is actually very nice. The people hanging around outside last night shouldn’t have made us intimidated- street life is a huge part of the culture, as we came to discover.

Coming straight from Thailand it was easy to make comparisons-  Hanoi feels much more chilled out, less frantic, than Bangkok. The architecture fringing the central Hoan Kiem Lake (‘Lake of the Restored Sword’) is reminiscent of the city’s French colonisers, with western-style art deco buildings and wide spacious boulevards juxtaposed with the maze of narrow alleys and haphazard building styles making up the Old Quarter just a stone’s throw away. We walked around the lake alongside families out for a Sunday morning stroll and locals of all ages jogging, stretching and practicing Tai Chi in the gardens.

After breakfast we took in some of the historical sites, strolling past the iconic Opera House as we made our way to Hoả Lò Prison, where we read all about how badly the brave political prisoners were treated by French colonists and how well, by contrast, the American POWs were looked after many years later. It was apparent throughout our stay in Vietnam that propaganda is everywhere.

The prison visit was followed by a look around the Vietnam Military History Museum, with artefacts and displays covering conflicts from 200BC to the 1970s. Unless you’re a total history buff you probably won’t want to spend more than an hour or so here, but if you’re into tanks and planes there are plenty of relics of US and Vietnamese kit to have a look around. Most of us will be familiar with the ‘Vietnam War’ of the 1960s and 1970s: not only does this museum offer an insight into the ‘American War’ from the Vietnamese perspective, it covers the centuries of invasions and occupation that preceded it, and really brings it home that this is a country that has endured a long and gruesome history of conflict to get to where it is today.

After the solemnity of the two museums we felt a bit touristed out. We’d chosen to walk between sites on what turned out to be Hanoi’s hottest day in 46 years, so feeling sticky and thirsty we treated ourselves to lunch and a reviving glass of Sauvignon Blanc at RuNam Bistro, opposite the Opera House. If you’re a wine lover like me then be warned- wine in Vietnam is expensive and the choice limited in all but the top hotels. They do brew decent beer though, which is a much cheaper option.

Refreshed by an afternoon nap, the evening was spent back in the Old Quarter. Before dinner we took in a traditional water puppet show at the Thang Long Water Puppet Theatre. I expected it to be contrived, and a total tourist trap, but it was actually rather sweet. The performance was vibrant and colourful, with the music performed live on traditional instruments by musicians in Vietnamese dress. You can buy tickets on the day from the booth outside the theatre for about 80,000VND (£3).

It was a short walk from the theatre to our restaurant and we had time for a quick cocktail at Avalon, on the North side of Hoan Kiem Lake. Unlike other Far Eastern capitals, Hanoi doesn’t have many swanky skyscrapers- so this ‘rooftop bar’ was more like a garden terrace on the sixth floor. The view was beautiful though, with reflections twinkling in the lake and the buzz of early evening activity coming to life in the park below. 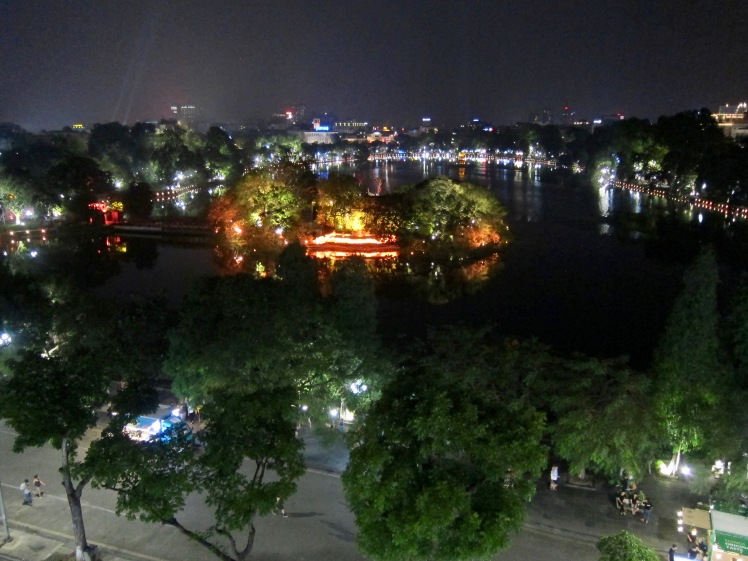 A couple of streets away and only a minute’s walk from the lake we passed through a busy street market, full of stalls selling street food, knock-off designer goods and general ‘tat’. It was the busiest and most bustling we’d seen Hanoi so far, and more typical of the Vietnamese street scene we’d soon be seeing much more of.

Dinner was at Marvel restaurant in Marvellous Hotel. I know eating in a hotel restaurant doesn’t give the most ‘authentic’ Vietnamese experience, but the food was delicious Vietnamese fare. I told myself that by the end of the trip I’d be brave enough to sit on a plastic stool at the side of the road and eat street food, but not yet!

Throughout our visit, we used Uber to get to and from the centre of town and it was cheap (about 60,000VND or £2 for a 20 minute journey) and reliable. In fact, we found Uber invaluable on this trip as English was not widely spoken (with Uber, if you’re not familiar, you book via the app which drops your pick-up location and destination on a Sat Nav for the driver to follow) and we’d heard taxis could try and rip you off (again, with Uber, the price is determined by the app based on availability and distance- you don’t pay the driver any money as the fare is charged to your Uber account).

Despite first impressions, our Airbnb was comfortable and inexpensive – but next time I’d be tempted to stay as close to the Old Quarter as possible, where there is still plenty of accommodation to suit all budgets. If you’re planning a trip to Halong Bay, as most visitors are, the tour operators will generally only pick you up from Old Quarter hotels- which for us meant an early start to get to the company offices before the bus set off on its rounds.

If you’re interested in what we got up to for the rest of our time in Vietnam, check out my One Week in Vietnam and 48 Hours in Ho Chi Minh City posts.

One thought on “24 Hours in Hanoi”