It’s hard to pick a favourite part of our two weeks in Japan, as our three destinations each had so much to offer, but our time in Kyoto will stay with me as the richest culturally, most aesthetically pleasing and most uniquely Japanese few days of our trip. 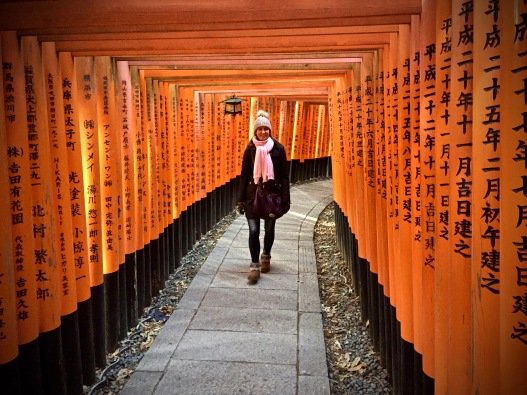 Of course, that also means most toursity – but for good reason. In Tokyo, we picked some popular attractions to visit, but we also spent time just being in the city, experiencing Tokyo life. It’s big enough to do that. In Niseko, we were skiers first and tourists second. But in Kyoto, it was all about heritage, and that means tourism. We made a list of things we wanted to see and do, arranged them in order of preference, and tried to come up with the most efficient way of getting around as many of them as possible in a little under two days.

Unfortunately, the movers and shakers of the last thirteen centuries weren’t thinking of present day tourists when they established the temples, shrines, parks and neighbourhoods on our list, and the city’s public transport planners were only a smidge more considerate. This meant that there was a fair amount of travelling to be done to get around the places we wanted to see, and most journeys involved a combination of trains, subways and buses. If you’ve read my Practical Guide to Visiting Japan, you’ll know that our ICOCA card was invaluable here, as it meant we could hop between these various forms of transport without having to buy tickets for individual journeys, saving us time and confusion in equal measure. Google Maps was a godsend, and having our wish list saved on TripAdvisor was really handy as it allowed us to access a single map with all of our saved locations on it.

We stayed in a traditional Ryokan, or Japanese-style inn, for our two nights in Kyoto. Having chickened out and booked western-style rooms for the rest of our trip, I’m pleased we got to experience this traditional accommodation as well. We actually got to see two different Ryokan, as the first one we turned up at, despite having an almost identical name, was not, in fact, the one I’d booked! The staff were tremendously helpful, reassuring us that we weren’t the first to make that mistake, and bringing us green tea and towels to dry off from the rain whilst we waited in their cosy lobby for a taxi to our actual accommodation.

Both Ryokan had a similar homely but cultivated feel: kind of a cross between a luxury ski chalet and a boutique country pub. The staff spoke excellent English and were well geared up for tourists, with all of the services you’d expect of a boutique hotel or high-end B&B. If I sound surprised, it’s because I didn’t really know what to expect: I was worried we were going to end up in the spare room of a Japanese stranger’s house which, whilst being the elusive ‘authentic’ experience many travellers seek, would be a little outside my comfort zone.

I needn’t have worried. The room itself was the quirkiest part of the stay, being very simply furnished in the traditional style. At bedtime, we moved the small table and chairs to one side to make room for our roll-out futons and bedding, which were simple to set up (although instructions were provided, in case there was any doubt!). They were comfy enough, but after two nights I was ready to return to a sprung mattress and elevated bed frame.

The Ryokan was well-located near the Gion district, which meant that in the evenings it was only a short stroll to our chosen restaurants and nightlife. At Tempura Endo Yasaka we enjoyed a mouth-watering tasting menu; fine dining the Japanese way as we sat at the counter and feasted on round after round of the crispiest tempura cooked right in front of us. The following night incorporated traditional entertainment with Japanese fare as we dined in the company of a Maiko as part of the ‘Enchanted Time with Maiko’ experience at Yasakadori Enraku.

Now this was a little unusual, I have to admit. We thoroughly enjoyed it, but it was unlike anything we’d ever experienced or will ever experience elsewhere. A Maiko is an apprentice Geisha, and Kyoto being the home of the revered Geisha profession, this is where young women have to train to hone their artistic accomplishments and social skills before they can graduate to the esteemed status of Geiko or Geisha. After her performance, our young Maiko and her translator chatted to us while we dined, and answered all our questions about the Geisha profession and its place in contemporary Japanese culture.

Wandering the streets of the Pontocho neighbourhood after dinner, we caught glimpses of Maiko darting between engagements: it was hard not to stare at them for their elaborate kimono gowns and ghostly white faces, and we felt lucky to have had the opportunity to sit and chat to one of these rare, ethereal creatures.

The other cultural experience we tried in Kyoto was a tea ceremony, where bitter green matcha was ritualistically whipped up into a foamy froth using traditional implements. The care and precision that was observed in this simple task was indicative of everything we learned about Japanese culture: from wiping down the bowl to drinking the tea itself, everything was done slowly and meticulously with utmost respect for the activity and its participants.

Eating and drinking aside, we visited some fabulously photogenic and generally pretty awesome (in the true sense of the word) spots across the city. Arashiyama Bamboo Grove is a pathway enclosed by towering bamboo trees like an enchanted forest; from here it’s a short walk to Monkey Park Iwatayama where, as well as seeing the cute monkeys, you can take in a panoramic view of the city. 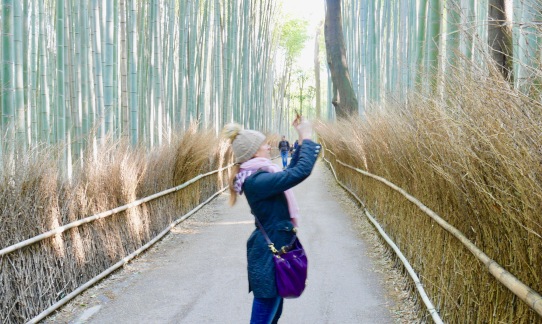 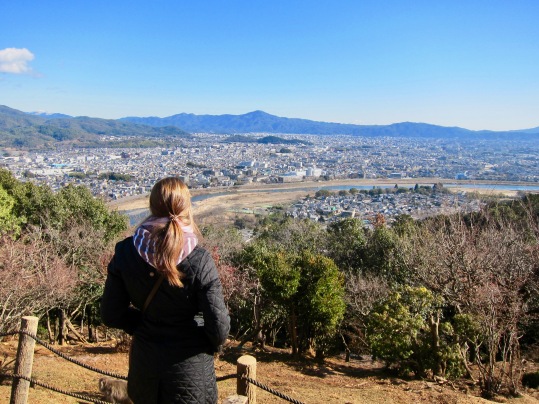 Being Japan of course, there’s a wealth of Buddhist temples and Shinto shrines- our favourite was Kinkaku-ji (Golden Pavilion) which was almost literally breathtaking. Coming straight after Kinkaku-ji, Ginkaku-ji (Silver Pavilion) made less of an impact, but was worth visiting for the magical gardens, which looked like they could be straight out of a fairytale; whilst the iconic Fushimi Inari-taisha made for Insta-worthy holiday snaps with its curving passageways of vermilion torii gates.

If the dizzy chaos of Tokyo was the perfect way to start our Japanese adventure, then Kyoto, charming and serene, was the ideal place to end it. We had experienced two sides of Japan; both equally otherworldly and mesmerising. 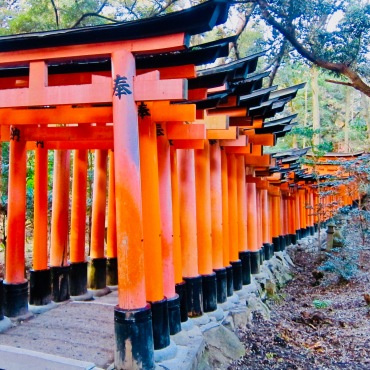 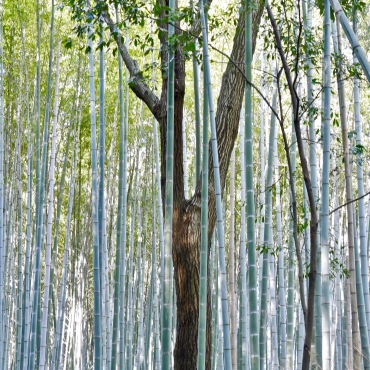 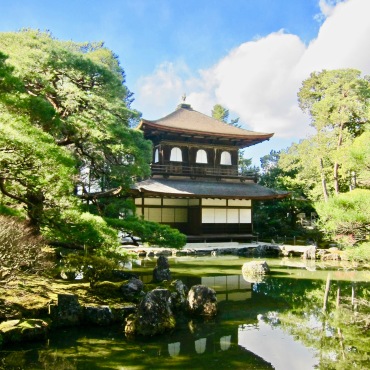 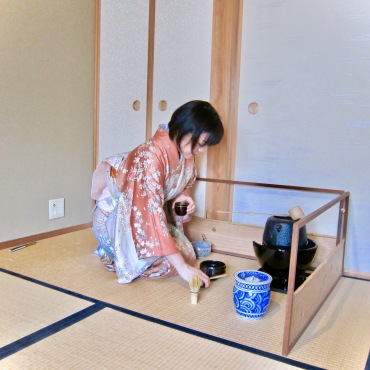 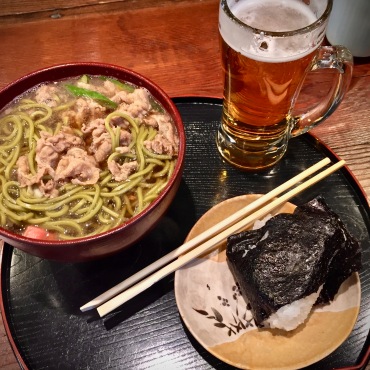 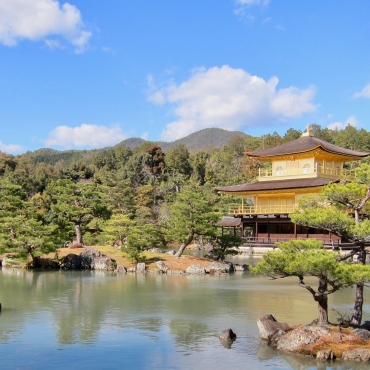 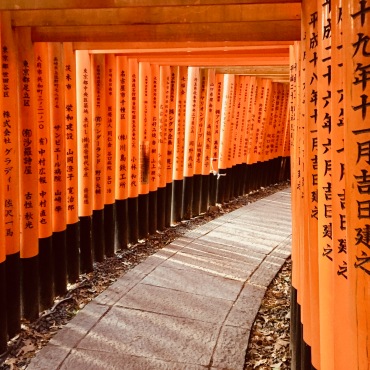 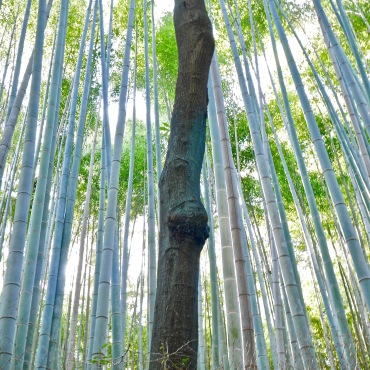 That’s hump day over with! It’s downhill all the way to the weekend, folks 👏🏻🎉😆 #humpdayvibes #waybackwednesday #middleeast #ksa #saudiarabia #travelblog
🌸BLOSSOMS AND BULLET TRAINS🚆And SO much more... 🇯🇵🍜🍱🍣 . Watching the rugby World Cup has made me nostalgic for our trip to Japan... . (Side note: did you know that in the 19th century ‘nostalgia’ was considered an illness, and it was possible to DIE from it? It also referred more to a longing for a place than for a bygone time, as we more commonly think of it today). . . Anyway, if you are inspired to travel to Japan for the first time then head to my blog to read about what we got up to plus some practical tips for getting around!
💗THAT DRESS💗 It’s not our anniversary or anything, but I was talking to a friend yesterday about wedding dresses and what we do with them. . It seems crazy that this is the most beautiful, expensive item I own, and yet I’ve only worn it once! 🤷‍♀️ . I can’t bear to give it away or sell it, neither do I want to put it in a box and never see it again, so it’s currently hanging in its dust bag in our spare room. Every now and then I unzip the bag for a peep, but I’ve never put it on 🤔. . So here are a few photos for dress appreciation! 😍 #tbt #weddingday #weddingdress #winterwedding
☀️GOODBYE SUMMER ☀️Throwback to hilltop views and borderline BBQ weather (it was pretty chilly) in Cornwall last weekend. It feels like we’ve managed to pack a lot into this summer. I’m always excited for Autumn and the promise of dark, cosy nights and Christmas around the corner (sorry for dropping the C-word already 😬). But I’m just not quite ready to let summer go yet... What to do?! 🤷‍♀️ . . . . #tbt #summertime #autumn #cornwall #england #staycation #holidays #vitaminsea
🇦🇺 Another #tbt to Oz a year ago. We rounded off our three week trip with a few days in Sydney. We stayed in an Airbnb close to the centre, went to the Opera, went to the Blue Mountains and on a wine tasting tour, watched the surfers on Bondi Beach, and mooched around generally eating and drinking. It was ace, and I’d be pretty stoked (😆) to live there if it weren’t so blinking far away. . . . #travelblog #travel #holidays #australia #downunder #sydney
This time last year... how time flies. Do you ever wish you could just press pause? Is that a bad thing to think? #holidays #travelblog #sailingtrip #yachtlife #sailingholiday #throwback #australia #yachtie